Interestingly, the depiction of this fundamental motherly act was demonised to the extent of being extensively trolled, both online and offline. Now, with legal notices and cases filed against them, The Mathrubhumi group must certainly have their hands full.

The objective as sources within the group inform us was simple and straightforward. All they wished to do was break the obvious stigma around breast-feeding.

While several people termed it a cheap publicity stunt by the brand, others came out in support of this bold cover that attempted to normalise a social stigma.

This is not the first time that social media has extensively trolled people on expressing their view. Huge outburst poured in with some compliments, whether it was Lisa Haydon posting her photo breastfeeding, Gap’s new advertisement showing a woman breastfeeding or Larissa Waters who breastfed her child in the Australian Parliament.

Author, Writing Coach and a Speaker on Gender and Diversity, Sudha Menon feels that “Why is everything about a woman always everybody’s business? I don’t understand the controversy here: A magazine puts a woman on the cover, with her breast exposed, while feeding a baby. That is how women nurse their babies and that is how most of us were nursed, so deal with it.

“I grew up in an age where I went behind closed doors to nurse my baby but times have changed and so has the way people look at what should be the most natural thing in the world. I’m not sure about the objectifying here.

Frankly, if the woman did not feel objectified, why get your pants in a knot?

“Having said that, I would say this comes with a statutory notice:’ Don’t try this in public. It can be injurious to health. It is a strange world out there,” she adds.

Kiran Manral, Popular Indian Author, thinks breastfeeding is a natural biological function and we have, over the years sexualised breasts so much, that we fail to recognise them for their original purpose, to feed human babies.

“We had a postage stamp back in the 1980s if I’m not mistaken that had a breastfeeding mother on it, and there was no outrage, and rightly so, because it is a natural state of being.

This entire move toward hyper-morality is what is leading this discourse askew, we’re digressing from the simple fact that women feed their babies.

“By accepting breastfeeding as normal and natural, we will encourage women to feed their babies longer, which is good for a child’s health and development. Having said that, on a personal level, I think a bit of a shock is great to stir up debate. If this has got us talking about breastfeeding, more power to it,” she opines. She thinks that with increased talk about the questions surrounding breastfeeding (such as the reality of sleeping and breastfeeding) will help mothers know what is to be expected or not. It is important for breastfeeding mothers to exchange experiences and feel comforted with this magical but sometimes scary ordeal. 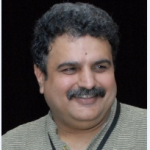 Pradyuman Maheshwari, Editor-in-Chief & CEO at MxM India, agrees that media should discuss such issues. There is no denying this need.

I feel that the decision to put such an image on the cover rather than playing it with graphics is definitely done with a motive to boost readership. This fact hasn’t been denied either, by the publication.

“In the past, magazines like The Illustrated Weekly of India (Bennett Coleman & Co.Ltd) have carried pictures of Adivasi women with their upper body partly-covered, which did seem titillating to many. But, it is finally the sole decision of the publication to use an image for the cover. I do not want to comment on the legal intricacy of this matter, however am sure Mathrubhumi would have borne in mind the obscenity codes, before they went ahead with this cover,” adds Maheshwari.

Author, Journalist and Activist, Vinita Deshmukh quotes, “They say a picture says a 1000 words. Grihalakshmi’s cover page is a sterling example of this.

This message on the importance of breast feeding is of social importance and hence this is both apt and bold of the magazine.

“In this world of perverted images being highlighted through various mediums, the innocence and beauty of the mother-baby bond during breast feeding is being distorted by the critics and trolls.

I am sure discerning readers understand the difference,” adds Deshmukh.

She loves travelling, dogs, sarcasm, humour and anything that spells F O O D, in that order. A writer on a journey to make positive stories a morning ritual and give society what it needs the most - optimism !!

The Idea Of Planetary Well-being

The Value Of Conscience

The Idea Of Planetary Well-being