The sixth edition of the Pune International Literary Festival (PILF) will be held at Yashada, Baner Road, from September 28 to 30th.

This was announced by Manjiri Prabhu, acclaimed novelist and Festival Director, during a Press Conference held in the city recently.

The festival is being organized with support from Vishwakarma Publications as the Title Partners and MIT–WPU as the Associate Partners, along with others. Shobha Arts is the Event Co-ordination Partner.

Addressing the event, Dr. Prabhu said, “The basic objective of the festival is to celebrate the “Word‟ in all forms to facilitate a direct connect between authors and readers and to create an inspirational platform for all creative people – at all levels of their careers.

“This will promote the culture of knowledge-based reading and learned appreciation of various arts and craft. This year marks 70 years of the Indo-Italian friendship and we have Lorenzo Angeloni, the Italian Ambassador to India, who will be the Special Guest at the inauguration.

“We also have two sessions planned around this theme. Our partnership with the Salzburg Global Seminar has continued into its third year and we are happy to invite international authors and speakers from Dubai, US and New Zealand like Fadi Zaghmout (gender activist), Julia Kostova (senior publishing executive) Paul Cleave (award-winning mystery author) and Paula Morris (award-winning author).

“This year our International Partnership has extended to include Swiss Arts Council, Prohelvetia. We also have Swiss author Ariane von Graffenried who will talk about performing arts,” she said. 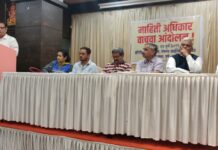 #VinitasPune: Turn Your Home Into A Gym. Here’s How!