Pune is a fascinating city in terms of time and space. In terms of time, one can see that there are four time zones of history. The first one was from the period of Chhatrapati Shivaji till the demise of the Peshwa dynasty. The second period was the political movement of Lokmanya Bal Gangadhar Tilak and his associates. The third one was the social reform movement that lasted till the 1960s. The fourth one can be considered as the industrial rise of the city for national as well as international manufacturing giants.

The period associated with Peshwa dynasty was full of orthodox traditions and practices. Both at the family level as well as social level, the orthodox practices were scary and distasteful. The second phase of political uprising was intense and action-packed. However, during this period also, not much happened in terms of improving the rights and life of citizens. The question of gender equality was totally out of question. The tradition of sati was respected. The plight of widows was pathetic. In such a social milieu, considering a movement for women emancipation was very courageous. That is what Maharshi Karve did and that is why I consider him to be the First Citizen of Renaissance Pune.

Maharshi Dhondo Keshav Karve was a man full of ideas and commitment. He understood the risks. He started small. He had to move away from old city precincts. He understood that the emancipation of women can happen only if they are imparted knowledge and skills. In fact, his emphasis on skills can be seen even today. The biscuits served in Cummins College of Engineering for Women are from the parent body of the campus. There are many such examples. In fact, when so much of hue and cry is made of skill development today, it is important to recall that educationists like Maharshi Karve were keen to ensure that the education process involved a strong element of skill development for women.

Pune is known for its pioneers. Maharshi Karve was the first among them. Professor Bhandarkar did pioneering work in the field of oriental studies. Wrangler Paranjpe did outstanding teaching and research in the field of mathematics. Professor Rajwade carried out independent but important research in history. Sir M Viswesarya did pioneering work in dams and flood control. One can add many more to this illustrious list. Pune became the lead town of trailblazers. Pune became the nucleus of original thinking. Pune was recognised as a place where ideas and thoughts were weighed more that material wealth of a person. Pune was also the nucleus of independent thought since political and social ideas were freely discussed and debated in this town. Justice Ranade and Gokhale added sharpness to the intellect and arguments. Even the mentors for Mahatma Gandhi came from Pune.

However, Maharshi Karve was the first… Social reforms are far more difficult than political reforms. In fact, the twists and turns of political currents within the limitations of democracy can be seen by all. However, the social reforms have not transformed the Indian society even today. The caste problem seems to be getting worse even when the material progress has occurred in all people. The gender issue is burning even today. The imbalanced male–female ratio in many states is shameful. The stigma of being born as a girl and the subsequent sufferings of women are continuing even today. Education and skills are needed for women even today. That is where the importance of Maharshi Karve can be seen even today.

I am not going to recount his life journey. It has been documented well. In fact, some movies and plays have been written and staged successfully. He was decorated with the first Bharat Ratna award. But what is more important is the relevance of his thoughts which reverberate even today. Also what is more important is that the city of Pune was and is a city that housed such trailblazers. Pune is known for its cultural vibrancy. Music, theatre, painting and other performing arts flourish here.

The experimental attitude of a city is a more important and attractive feature of Pune. Many experiments in thought process have given birth to new movements and new initiatives in this city. Maharshi Karve also gave the birth to the idea of women’s emancipation. He travelled around the world to understand how he can move forward in his mission. He and his family had to suffer not only pecuniary problems but also social problems. In fact, all his sons became social reformers in one way or the other. The issue of birth control was successfully championed by one of his sons. Once again, the freedom of expression provided by the city of Pune enabled his son and many such persons to transform the society in one way or the other.

The big lesson from Maharshi Karve in Pune is that social reforms go a long way as compared to political reforms. Any city needs thinkers who have the freedom to express their thoughts, ideas and views. Such a city becomes the real smart city. I do not agree that having streamlined traffic and similar measures make a city smart. It is the people and their views that make a city smart. The music in Vienna, the freedom in New York and culture in Kolkata has made these cities truly the fountainhead of ideas. People behind these ideas are the real citizens of such cities. In that sense, Maharshi Karve is the first citizen of renaissance Pune.

India is going through a transformation in the field of urbanisation. The city as an old concept is giving way to a new concept. The growing of suburbs, the gender respect, the emancipation of downtrodden and the empathy for all citizens are some necessary ingredients when the cities are growing at a rapid rate. Persons with vision are needed besides the funding and the governmental approvals. Pune was vibrant because of people like Maharshi Karve.

Pune will be vibrant because of its people. We all hope that Pune remains the hub of ideas and social transformations. For this to happen, we need social thinkers like Maharshi Dhondo Keshav Karve. The educational establishment of Maharshi Karve Stree Shiksan Sanstha (MKSSS) is a testimony to the transformation of his ideas into reality. The movement created by him spread throughout the state and the country. Even today, one sees that the thoughts of Maharshi Karve are needed to improve the lot of women in many social pockets of India. Such persons and their ideas make the city real smart. 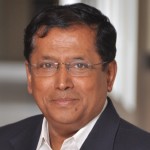 Professor Sanjay Dhande is a former director at IIT Kanpur. He is a freelance writer for Pune365 and can be reached at sango.dhande@gmail.com. The views expressed here are personal.

Sanjay Dhande is a former director at IIT Kanpur. He can be reached at sango.dhande@gmail.com. The views expressed here are personal. Sanjay Dhande will write every Thursday for Pune365.

#VinitasPune: Will We Learn From The Lessons The Lockdown Taught Us?

The Busiest Place In The Universe

Is The Economy Irreplaceable?

#VinitasPune: Will We Learn From The Lessons The Lockdown Taught Us?

The Busiest Place In The Universe