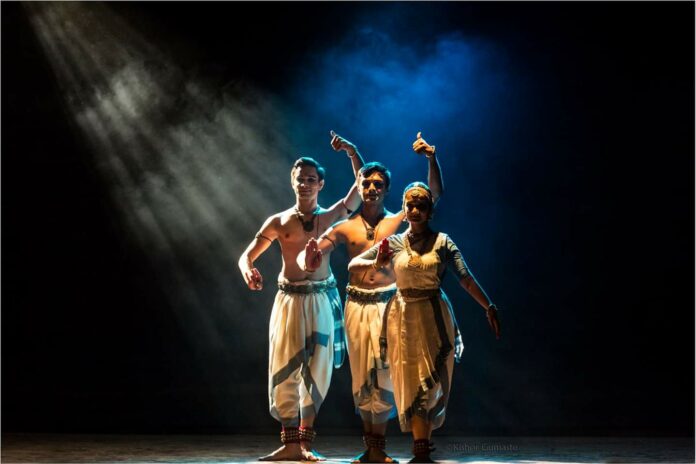 But one that had grabbed everybody’s mind space was the Ramayana retelling -Abha, which was staged on Mahavira Jayanti by artist unparalleled Parshwanath Upadhye.

The theme credit of course must be attributed to Devdutt Patnaik whose book Sita forms the base of the text. Therefore the research in the approach of the story progression is totally irreproachable.

The name chosen Abha literally meaning lustrous beauty, lived up to the epithet, with everything about the presentation shining. From the picture perfect vignettes created through the vivid choregraphy, the clearly enunciated emotions portrayed, the sparkling jewelry of Sita, to the luminescent performances by the trio-Parshwanath Upadhye as Ram, Adithya PV as Laxman and Shruti Gopal as Sita.

Tulsidasji’s Mangala bhavana….began with the three making a grand entry on the mellifluous strains of the flute and not a single soul in the audience remained that was not uplifted. The trio moving from one scene to the other donning various roles while keeping the fulcrum on their established roles of Ram, Laxman and Sita was spectacular. Some of the vivid imagery created, like the Pushpak Viman in flight, Sita depicted as Gajalakshmi have been etched in the hearts of the rasikas forever.

Earlier seen in the city as the nattuvanar, PV Adithya’s dance idiom was strong and his pakkad on tala and the speed, alongwith his ability to move effortlessly from one nadai to the other was a class act where he overpowered the other two. As the devoted Laxmana he was the perfect foil for the brilliant Parshwanth as Rama, the casting being perfect. To his credit, keeping pace with Parshwanath with panache and in some places surpassing him in the angashuddhi, PV Adithya held his own. Shruti Gopal as Sita, the pivot of the presentation, was the perfect blend of gentleness and playfulness. Her innocence in the scene of Sita easily lifting the Shiva Dhanush was brilliant as was her childlike awe while enjoying the wonders of the forest.

While nothing really could be faulted of the two dancers, it is when they are dancing alongside the dance whiz Parshwanath himself, one cannot but look at the comparison. Parshwanth’s flawless footwork, his experience of stage, his face a canvass of emotions, flitting, changing, absorbing, rivets the onlooker’s attention and then little wonder, Shruti looks a tad timid in the technical pieces next to the high energy of the talented duo and Adithya’s abhinaya does tend to be dull against the other two.

The beauty of the music, composed by Rohit Bhatt is simply heart-warming.

Having watched the premiere of Abha on an Internet portal and hearing him in person during Parshwanath’s recent solo recital in the city, I was eager to hear Rohit’s voice again. And, although, the music was ethereal, his voice was missed by me personally. The last scene where Sita gets into Raudra roop to vanquish a demon, was not very well executed. The interpretation of her seeking Rama’s permission to kill the demon was a variation that did not work well as Sita’s Raudra looked put on with it being expressed more through lights than the situation. In actual myth, it is a spontaneous action as the demon takes Rama unawares.

All said and done, Abha was a classical treat for rasikas of the city and Parshwanath UPadhye’s fan following has grown manifold now.

The concluding thillana, elaborate in its execution, had a fine sense of rhythm and footwork concluding with an ode to Sri Rangasai and “Bhagyadha Lakshmi Baramma”. The recreation of the three protagonists returning to the abode of Vishnu-Vaikuntha in their original forms Laxman, as Sheshayana, Ram-Lord Vishnu and Sita as Laxmi was exquisite.

The last scene of the three once again donning the next avatara Krishna, Balarama and Radha was akin to a blockbuster movie announcer of the upcoming sequel. Next-Krishna??

Shumita Mahajan, an established name in the field of Dance, Features and Marketing Communication, has over 2 decades experience in Media, Communication and Critique of Performing Arts.

Is Hoping For Empathy Too Much To Expect?

How Do You Value Your Attention?